Often customers don’t realize the benefits of regular maintenance, and systems go years without being tended to. They end up having higher utility bills, breathing allergens which have entered the air, and running into frequent problems with their system. By providing customers with the benefits to regular maintenance, they may be more encouraged to follow through with the process, which may lead to less callbacks for technicians.

**Efficiency**
Studies show that a system that has been neglected will collect dirt and allergens within a home’s ducts and vents, forcing the system to work 20 percent harder to release the same amount of cool or warm air as it did when it was brand new. By cleaning these areas, less energy will be needed to run the unit, putting less stress on the system’s components. When maintenance is done regularly, there’s less pressure on the system, which will prevent future problems.

**Less Repairs**
All the pressure and added stress on a system’s components will lead to frequent breakdowns and emergency repairs. By scheduling a maintenance appointment before each winter and summer season, the likeliness of this occurring decreases drastically. It’s best to ensure the system won’t breakdown during the seasons its needed most.

**Healthy Air**
Over time, dust and allergens collect in a buildings ducts and vents which are then pushed into the air by the unit. A properly maintained air conditioning unit will improve the quality of air, and prevent allergens from entering a home. Clean filters and coils allow better air quality and prevent respiratory problems.

**Lower Bills**
Probably the most appealing benefit to maintaining a Hair conditioning unit is saving money. When a system is running efficiently, it does not have to work as hard to maintain the room’s temperature. This lowers the cost of electricity, and the cost of replacing a system’s failed components.

**Life of the System**
Overall, a well-maintained system can last at least 5-6 years longer than one that has been neglected, even more in a salt air environment. A well-maintained unit is less likely to require sudden or emergency repairs, such as leaks or breakdowns. It pays to schedule regular maintenance appointments rather than be forced to buy an entire new system 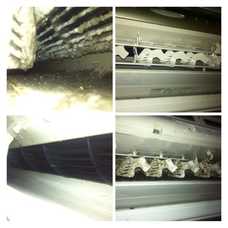 Coolabah Cooling is your source for quality air conditioning services, including maintenance and repair. Our team of air conditioning professionals will be more than happy to answer all your questions and address your needs. Talk to us today!